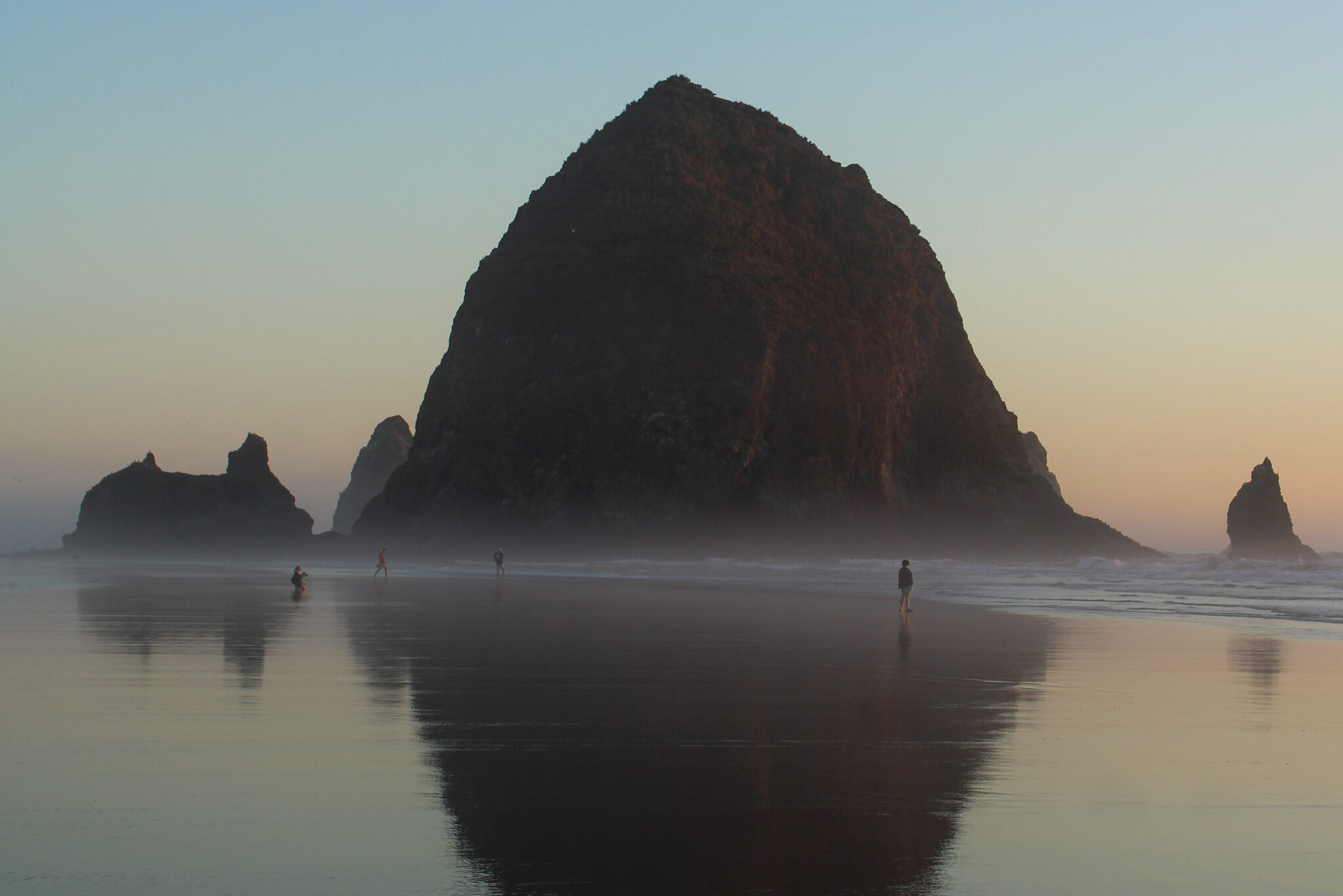 In my humble opinion, Oregon doesn’t receive the respect it deserves.

I’m sure there are many out there who have known for a long time that Oregon rocks. However, I have to assume that there are those of you like me, who hadn’t even considered Oregon as a destination for far too long.

Oregon is sitting there, just waiting for you prance around its whimsical waterfall-ridden forests and other-worldly coastline.

Maybe you’d prefer the high desert, or a nice jaunt up a picturesque volcano. OR, you just want to surround yourself with a dozen food trucks, washing down the best cheeseburger you’ve ever had with the best Thai noodles you’ve ever had.

I hope I’ve made my point. Oregon is full of beautiful, interesting, and delicious things to do. In fact, here are 11 examples of places to visit in this epic state:

City of Roses, Stumptown, Rip City. It’s a city with many nicknames and even more to do. That is why If you’re visiting Oregon, it’d be a miss not to stop by beautiful Portlandia.

For starters, let’s talk food. Because wow, what a food town. The food scene alone makes Portland an awesome place to visit.

One of the best ways to partake is by visiting one of the many food truck pods scattered across the city. Enter one of these pods and let it rip. Take a bite of a delicious burger, chase it down with amazing dumplings, and top it off with.. I don’t know, beer? Falafel?

As for non-wheeled ventures, one of my favorite experiences was visiting Huber’s Cafe. Order their renowned Spanish coffee with their all-year-round Thanksgiving dinners and it won’t disappoint.

Aside from food, the famously environmentally friendly city of Portland is a fascinating mix of urban and natural landscapes. For example, Forest Park is one of the largest urban forests in the US. You can be within city limits and feel miles and miles away from it at the same time, which makes Portland a particularly unique urbanscape.

There’s so much more to Portland than can be explained in a few paragraphs, I didn’t even touch on the beer, or music scene! However, awesome things are best discovered on your own. Portland is an incredible place to explore for yourself during a visit to Oregon.

Did you know The Goonies was filmed here?! Just kidding, of course you did. Undoubtedly one of Oregon’s most iconic locations, Cannon Beach is a gorgeous place to visit in Oregon.

Capitalized by the majestic Haystack Rock, Cannon Beach is a pristine coastline perfect for taking a stroll or for having a picnic. The water rolling over the sand so smoothly creates a mirror for the sky that you have to see for yourself.

However, the main event begins when the sun begins to set. Surrounded by fellow flabbergasted spectators, I truly have never seen a sunset like that in my life. If nothing else, the sunset makes Cannon Beach a must visit while in Oregon.

In case you weren’t aware, Oregon loves beer. And in Bend, it seems like there are more breweries than people. Which obviously makes Bend a perfect town to visit in Oregon.

It’s an idyllic town with lovely shops, restaurants, and numerous places to chill outside while enjoying a beer and playing some yard games. My favorite place to do so is Crux Fermentation, but there are, as I mentioned earlier, a plethora of great watering holes.

Boozing aside, Bend is truly known as a gateway to some of Oregon’s most beautiful natural escapes.

For example, you can go for a hike up Mt. Bachelor, kayak on the DeSchutes River, or try your hand at rock climbing at nearby Smith Rock State Park.

Bend is one of the coolest places to visit in Oregon for those who love the great outdoors and want to retreat to a laid-back mountain town vibe.

Born from mounting ash and debris from the surrounding volcanos, Smith Rock State Park is 650 acres of hiking and rock climbing bliss. This is a place for the adventurer, as people from all of over the world visit to access its climbs.

After burning your energy gripping to a rock whispering to yourself “Why did I do this, why did I do this”, the river below is a picture perfect area to picnic and recharge.

The landscape is truly one of the most unique I’ve witnessed during my time out west and is a fascinating place to visit while in Oregon!

Mount Hood is another Oregon celebrity, and for good reason. What a wonderful talent! Stealing the gaze of visitors and native Oregonians alike, this superstar seduces you from 11,239 feet making it the tallest mountain in Oregon.

Located about 50 miles east of Portland, Mount Hood makes a perfect respite from the city.

You can hike trails, climb glaciers, and look out on some beautiful views of the surrounding Oregon (and Washington!) area.

As someone who enjoys photography as a hobby, Mt. Hood is one of the easiest places to take your new best photo. Hike up to Mirror Lake and take the iconic photo of the Mt. Hood’s reflection gracing the eerily still water.

Don’t you love surprises? I had never heard of Silver Falls State Park before arriving to Oregon, but was so happy to have been introduced. It’s a fairy tale land of mossy trees and caves vailed by waterfalls.

It’s the quintessential Pacific Northwest vibe. Moody, rainy, green, and serene in all the right ways.

The name of the game here is waterfalls, because the park is riddled with them.

In fact, hike the Trail of Ten Falls to see why. Not too far a drive from the state capital of Salem and numerous adorable small towns, Silver Falls State Park makes an awesome day trip for anyone visiting Oregon.

Retreating from nature, we move on to one of Oregon’s other great cities to visit. Home to awesome museums, the beloved Oregon Ducks, some tasty breweries, and plenty of lush green space, Eugene, Oregon is a truly must-visit city in Oregon.

For those seeking a cultural boost, the Jordan Schnitzer Museum holds an extensive collection of world-class art and artifacts from all over the world.

Once you’ve exhausted yourself contemplating works of art, you can head downtown and find a hop-filled pint to enjoy while you admit you just didn’t “get‘ that one piece of art. Our favorite spot was Gratitude Brewing.

And, to round off the perfect day, you can walk that beer off in Alton Baker Park where (if the timing aligns), you can enjoy the foliage lining Willamette River.

I’ve already mentioned one area of Oregon’s stupidly beautiful coast, but this coast is lined with dozens of towns and parks worth visiting. One excursion to the coast that stood out for me was Cape Kiwanda State Natural Area.

Part of the Three Capes Scenic Route, Cape Kiwanda features a rugged cliffside with ferocious wave action crashing alongside it.

You’ll also see those mesmerizing sea stacks that are synonymous with the Oregon Coast. Climb up the Great Dune and take in the spectacular views as the breeze caresses your mullet.

And once you’re done, retreat back into the peaceful beach town, perhaps enjoying a cold one at Pelican Brewing overlooking the water.

Salem may be the state capital, but it’s much less visited than some of Oregon’s other towns.

Salem was my home away from home while visiting Oregon. I didn’t know what to expect, but I knew I wanted something a little different. Salem nailed it.

About an hour south of Portland, Salem has plenty to offer for everyone.

That could be awesome restaurants, some funky bars, pristine parks, and interesting historical sites.

For the wine-lover, Salem is in the Willamette Valley, which makes it close to some of Oregon’s loveliest vineyards and wineries such as Willamette Valley Vineyards. Sipping on Pinot Noir overlooking the clouded foliage from this fortress on the hill made for a Sunday well-spent.

Salem is also surrounded by top-notch nature excursions, being less than an hour away from Silver Falls State Park in one direction, and the Oregon coast in the opposite direction.

After spending a month in Salem, I personally recommend a visit to the capital for anyone traveling in Oregon.

The Willamette Valley is home to hundreds of wineries. Finding one with delectable Pinot Noir and a backdrop of beautiful rolling green hills is too easy.

We mentioned one earlier in Willamette Valley Vineyards, but another favorite of ours is J Wrigley Vineyards. North of Sheridan, the beautiful surroundings can’t be beat. However, this is just one of many.

If you’re not interested in wine, Willamette Valley is full of other outdoor recreation such as canoeing or hiking. Or you could find yourself shopping local for a great find in one the several downtown shopping districts. You can even go truffle hunting if you’re interesting in digging through the dirt!

Driving through this beautiful countryside seeing what you can find is an excellent thing to do while visiting Oregon.

Another perfect day trip from Portland, Columbia River Gorge National Scenic Area is one of the jewels of Oregon.

Many might look up the area and see images of the famous Multnomah Falls, the tallest waterfall in Oregon. Unfortunately, it was closed off during my time in Oregon, making me very sad.

However, I was happy to learn that there are plenty of things to do outside of seeing that screensaver waterfall.

For starters, other waterfalls!

Lining the mighty Hood River, the area provides ample opportunity to hop on the water and get boating.

If you don’t have a lot of time, sitting back and enjoying the drive along the Historic Columbia River Highway is well worth it.

Finally, there are numerous small towns along the river to find an excellent meal, relax, and reflect on the best day ever. No doubt, a trip to Columbia River Gorge is a must see while in Oregon.

Did we miss any of your favorite places in Oregon?

Let us know in the comments if there are anymore places in Oregon you’d like to see on our list!